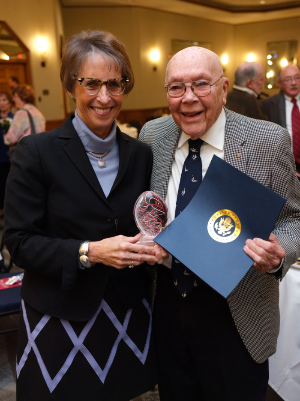 For almost seven decades, James R. Cooper (Jim) has been dedicated to giving back to his community. Born in 1924, Jim is a lifelong resident of Newark. He attended Roosevelt Middle School and graduated from Newark High School in 1942. After serving in World War II and attending university, Jim settled down in Newark with his wife, and middle school sweetheart, Julie Henzy Cooper. The couple had three sons, James, Thomas and John, and were married for 70 years until Julie’s death in 2015.

Like his father before him, Jim worked as a court reporter for over 30 years in the Licking County Common Pleas Court. Jim also assisted Everett D. Reese with transcribing his speeches for the American Bankers Association, allowing them to communicate often through their work.

While enjoying time at home with his family, Jim often volunteered and coached baseball in Newark. Many memories were made for the Cooper family around baseball. Jim Cooper belonged to a group that was responsible for establishing the Mound City Little League facility in 1958. The property secured by Jim, Everett D. Reese and J. Gilbert Reese was donated to the Licking County Foundation and is still held by the Foundation today.

Jim was also known for supporting one of Mound City’s key goals—never charge a player. Mound City Little League is the last little league program in the United Sates which does not charge participation fees. This tradition leaves a legacy of caring to pass on to all generations of Licking County little leaguers.