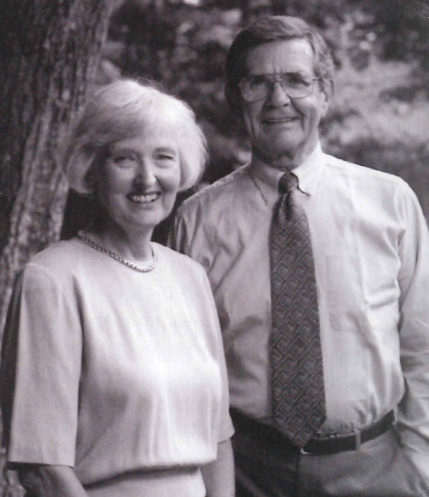 The William S. and Sue O. Moore Fund, established in 1995 at the Licking County Foundation by Bill and Sue Moore, is dedicated to upholding the Moore’s love of supporting beautification projects in parks and public land within the City of Newark. Bill and Sue loved contributing to the community and found giving to the Foundation an effective way to leave a legacy with continued future benefits.

Bill, raised in Newark and a 1950 graduate of Granville High School, met his future wife, Sue, at Indiana State University. The couple settled in Newark and spent the next 60 years of their lives as dedicated and philanthropic members of the community.

Bill served as City of Newark Mayor from 1983 to 1991 and Service Director from 1977 to 1983. Following Bill’s tenure in office, Bill and Sue continued to feel a strong pull to serve others. From 1992 to 1998, they traveled overseas to former Eastern Bloc countries, where Bill taught free enterprise systems and democracy through the International Executive Service Corps and Sue taught English.

The two still remained committed to local organizations. Sue was a member of Monday Talks, Twentieth Century Club, Progressive Club and P.E.O. Sisterhood. Bill was a member of Newark Rotary, and served as a board member for Hospice of Central Ohio, Licking County Aging Program and Par Excellence School. Both were beloved members of the Licking County Foundation Governing Committee.

Their love of beautifying Newark is celebrated each year with a grant from their fund to support planting flowers in front of City Hall in their memory. Foundation Park in downtown Newark is now undergoing a refresh to provide more green space and an outdoor gathering area. When completed later this month, it will be named the William S. and Sue O. Moore Plaza.