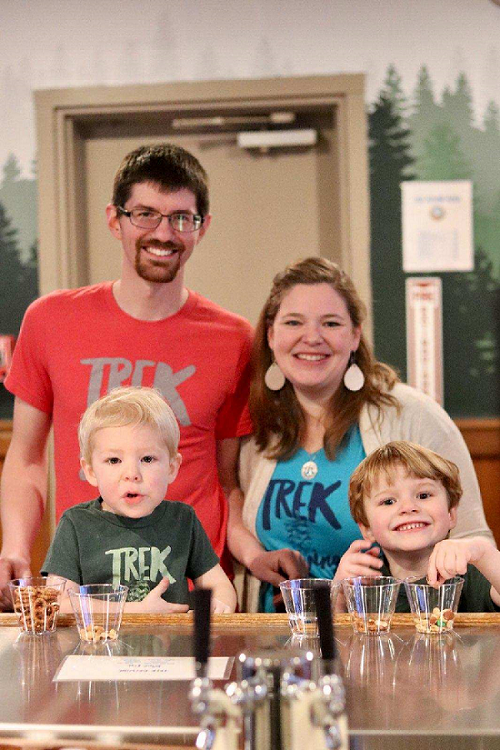 Trek Brewing Company opened its doors at 1486 Granville Road in 2018 with the vision that great beer and great people come together to do incredible things.

Since Trek’s inception, owners John and Kristin Ream have been dedicated to giving back to the community they call home. John and Kristin both graduated from Granville High School in 2004. After marrying, the Reams moved to Seattle—where John worked as an aerospace engineer and Kristin as a teacher. They spent nine years out west before the dream of opening a brewery was born. “When we decided to follow our big dream and open a brewery, we decided if home is where the heart is, it should be where the beer is too,” they said. The Reams and their two small children returned to Licking County, and with lots of family support, Trek Brewing Company opened in Newark.

“A big part of why we decided to start Trek Brewing Company was so that we could be a vehicle for good in the world. The Trek Together Community Fund is a great way for us to distribute the funds we raise and also a great place for us to collect funds and earmark them for certain projects,” said the Reams. The fund helps the Reams to carry out their philanthropic goals.

Trek has hosted several fundraisers, like the Gingerbread House That Beer Built to support Habitat for Humanity and the 0.5k Run with a Point to support the YMCA All for One Camp. Their special SMaSH series of beers and a weekly community night on Thursdays sees $1 from every pint sold donated to charity. “We’re striving to partner with local non-profit organizations and if we don’t have an organization present, $1 from every pint goes into the Trek Together Community Fund,” said the Reams.

“We hope that the fund is able to give back to the community in a meaningful and lasting way, to give to multiple projects throughout Licking County, and to serve as many of the needs as we can,” said the Reams.