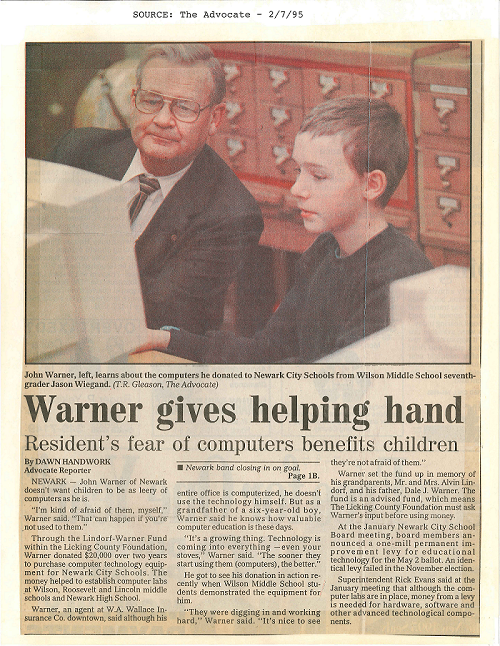 The Lindorf-Warner Memorial Fund of the Licking County Foundation was established in 1966 by Mrs. Gladys Lindorf-Warner and her son, John L. Warner, in honor of the late Mr. and Mrs. Alvin R. Lindorf and Dale J. Warner. Mr. Lindorf was a founding member of Park National Bank and owned its first building on North Park Place in downtown Newark. Mr. Warner was a realtor and director of Park National Bank and First Federal Savings and Loan Association.

John was born in Newark and was a graduate of Newark High School. He attended Denison University, where he met his future wife, Dell Christine Frederickson. He was a veteran of the U.S. Navy and retired from the Dawson-Coleman-Wallace Insurance Agency. John was extremely involved in the community and served on several local boards, including Park National Bank, Welsh Hills Schools and the Newark Campus Development Fund. John passed away in 2002. Christine passed away in 2010. Christine and John both had served on the Governing Committee of the Licking County Foundation and were dedicated supporters of higher education and youth programs in Licking County.

The Foundation’s Leaders for Learning program is made possible through generous support by the Lindorf-Warner Memorial Fund. The award was created in 1993 to honor teachers throughout Licking County who exemplify excellence in their fields. In the past 25 years, 348 teachers have been recognized for their excellence and received over $100,000 in grants to support their classrooms or professional development. This very important program will go on in perpetuity because of the Warner family’s love for this community and education. Partnerships with donors like the Warner family make it possible for the Licking County Foundation to continue changing the lives of many in the community we love.