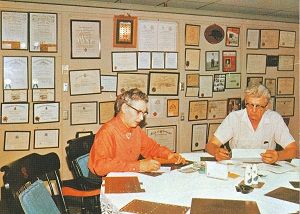 Local history can open our eyes to the most fascinating stories about our neighbors. One such example is that of former Granville residents Dick and Clara Francis, pioneers in fiberglass research.

Dick began his work with fiberglass in the Owens-Corning research laboratories in 1936. Later joined by his wife, Clara, the duo went on to own and operate Francis Industries of Pataskala to continue their research. They began inventing fiberglass products and received many patents, the most commonly used is today’s solid fiberglass fishing rod. They also produced a line of fiberglass antennas, radomes, and insulation for atom smashers. Mrs. Francis was affectionately known as “the Boss.” The pair garnered many honors. They appear to be the only husband and wife team in “World Who’s Who in Finance and Industry,” received praise from Ohio Governor James Rhodes for their creative talents, and were named Kentucky Colonels and Admirals in the Nebraska Navy by governors of the respective states. After her husband’s passing in 1971, Mrs. Francis traveled the world and was in the first group to visit mainland China in 1979. Her travels took her to every continent.

Through a bequest in her will, Clara established the Dick and Clara Francis Scholarship Fund, upon her death in 2009, leaving a meaningful legacy to this community. The scholarship assists graduating Licking County high school seniors who plan to further their studies at an accredited post-secondary educational institution. The couple’s innovative pursuits and entrepreneurial spirits reinforced their belief that higher education is vital for all and led them to create this scholarship providing broad-based support for any future Licking Countian seeking to explore and advance their passions.